DUBAI: When tens of thousands of young people took to the streets of Baghdad and towns and cities across southern and central Iraq in late 2019, one core demand resonated louder than any other — employment opportunities.

The country, which had only recently emerged from decades of tyranny, siege, war and insurgency, had delivered precious little for the generation of young Iraqis who came of age in the years after the fall of Saddam Hussein in 2003.

Two years on from those protests, which fizzled out with the onset of the COVID-19 pandemic in early 2020, and under the brutal heel of repression meted out by Iraq’s powerful militias, young Iraqis say nothing has changed.

“If anything we’re worse than when we started,” Rashid Mansour, a hairdresser from west Baghdad, told Arab News. “Neither me nor my cousins can afford to stay here. We all work part time. Just like the country, we’re all just getting by.”

With few performance indicators to suggest otherwise, Iraq’s sputtering economy shows little sign of breaking free of its long-standing dependence on the one thing that sustains it — oil.

Even though the country has opened up to the wider region and the world, having relaxed visa restrictions on visitors, there is not much sign of investment beyond the oil sector in the many other industries and enterprises long championed by its leaders.

Calls to diversify the nation’s economy have gone unanswered, while demands to streamline its bloated public sector continue to fall mostly on deaf ears. Efficiency drives are openly mocked by citizens, as are the hoops investors must jump through to establish private enterprises.

Almost two decades after the US-led invasion toppled the Baathist regime, Iraq continues to maintain one of the biggest per capita public-sector workforces in the world — which on paper employs about 7 million people among an estimated population of 39.3 million.

How this burden on state coffers might be reduced and workers moved into wealth-creating private ventures has stumped successive governments, and none have dared move against a constituency that could tip the result of any election, or against a system that has long been central to the way the country is run.

“Iraq is up to its neck in this issue,” Ahmed Tabaqchali, chief strategist for the AFC Iraq Fund and a senior fellow at policy research institute IRIS Mideast, told Arab News.

“You see other countries, like Saudi Arabia with its Vision 2030 — it’s a good plan to stop oil dependency. But Iraq is different. You don’t have a strong central government there but rather multiple power sources.

“Oil revenues play a huge part. They pay public-sector pensions and salaries and offer social security. It’s a challenge to get off that. There is an unwritten social contract between the government and its people. People expect to be provided with services for their acceptance of the ruling government, and a public-sector job is one of those services.

“No party wants to embark on the reforms alone because that would weaken their power. Iraq needs a political class that is committed to long-term plans because that is the only way it would work. The private sector needs time to develop.”

According to a recent World Bank country profile, oil revenues account for about 85 percent of the Iraqi government’s budget. A UN study in November 2021, entitled A Diagnostic of the Informal Economy in Iraq, found the country’s private sector is largely informal and accounts for 40-50 percent of employment.

Private-sector jobs pay lower average wages, offer fewer benefits and less job security than public-sector roles, which are seen as safer and more comfortable compared with the uncertainty of going it alone or trying to manage a start-up within a cumbersome regulatory environment.

“A large number of the youth are jobless and restless. Matters haven’t been improving with the dollar rising on the Iraqi dinar. Prices have doubled. It’s hard to afford a lot of things. The economic situation has everyone exhausted.”

The obstacles to building a functioning private sector are well understood by senior officials. In 2020 Ali Allawi, at the time the finance minister, introduced an economic reforms white paper that aimed to streamline the process of investing and setting up a business. A year later, he warned that oil revenues alone cannot support the salaries and perks enjoyed by state employees indefinitely.

Through the years, the tedious but necessary task of overhauling an ossified economy and a sclerotic bureaucracy has proved unappealing to Iraq’s ruling elite. The lumbering process of government formation after every general election demonstrates just how difficult it is to get the country’s many political factions on the same page on almost any issue.

“The Iraqi bureaucracy expanded because of the socialist system which had been established by Gen. Abd Al-Karim Qasim in 1958, and further in 1968 when the Baath party came,” Entifadh Qanbar, president of the Future Foundation in Washington and a former aide to Iraqi politician Ahmad Chalabi, told Arab News.

“The remnants of the socialist Iraqi state still control laws and regulations. I would call it ‘anti-business’ regulations. Bureaucracy was already massive but after 2003 bureaucracy exploded further. Iraqis developed a problematic perception of: ‘If you want to find a job, find a governmental one.’

“Every PM, when he comes to a new government, promises new government jobs — when the state is, in fact, incapable of paying more salaries.”

In Iraq’s semi-autonomous Kurdish region, there are some signs of doing things differently, with Masrour Barzani, prime minister of the Kurdistan Regional Government, having embarked on a reform program that has shaken up the status quo, in whose preservation the governing factions had a vested interest.

“In the past two years, the KRG has embarked on the biggest initiative ever undertaken to reform our public finances and to empower private enterprise,” a senior Kurdish official close to the PM’s office, who asked to remain anonymous, told Arab News.

“The changes we have put in place are driving efficiencies and recouping large amounts that can be redirected to buy the goods and services that truly matter, such as electricity generation, medicine and frontline workers. We recognize that the old ways of poor public finances do not drive progress or better living standards.

“The digitization of our government expenditure has been central to these changes. This move alone has saved hundreds of millions of dollars a year from the cost of the government, eliminating waste. Better procurement exercises have introduced further savings.

“We are also making sure that small companies have a genuine shot at winning public money. We have streamlined the process of registering a business, which was previously so cumbersome it acted as a disincentive.”

Looking to the future, Qanbar says the key to solving Iraq’s problems lies in radically improving the business environment and weaning the political economy off its dependence on oil.

“The addiction to the oil revenue has grown dangerous over the years,” he told Arab News.

“The Iraqi budget fluctuates depending on the prices of the oil market. The instability of the country isn’t attractive to foreign investment. There is a huge risk for foreign investors because they would require protection and security, services insurance companies cannot provide.”

The need to do things differently has long been touted by visiting officials and nongovernmental organizations in Iraq. The use of green energy is one such idea that has so far failed to gain traction.

“Given the lack of capability to invest and improve at the most basic levels, I think it’s out of the question that Iraq can invest in green energy at this point,” said Qanbar.

“It can’t provide basic services to its citizens, such as water, electricity, education and infrastructure.”

Fri Jan 28 , 2022
With each step up the utility pole, the leather tool belt rattles against Frankie Martinez’ waist. He climbs at a glacial pace. The hooks on his steel-toed boots jam into the wood. A soft, subdued thud. His stomach churns, uneasy from lunch: a bacon cheeseburger and protein bar. Every other […] 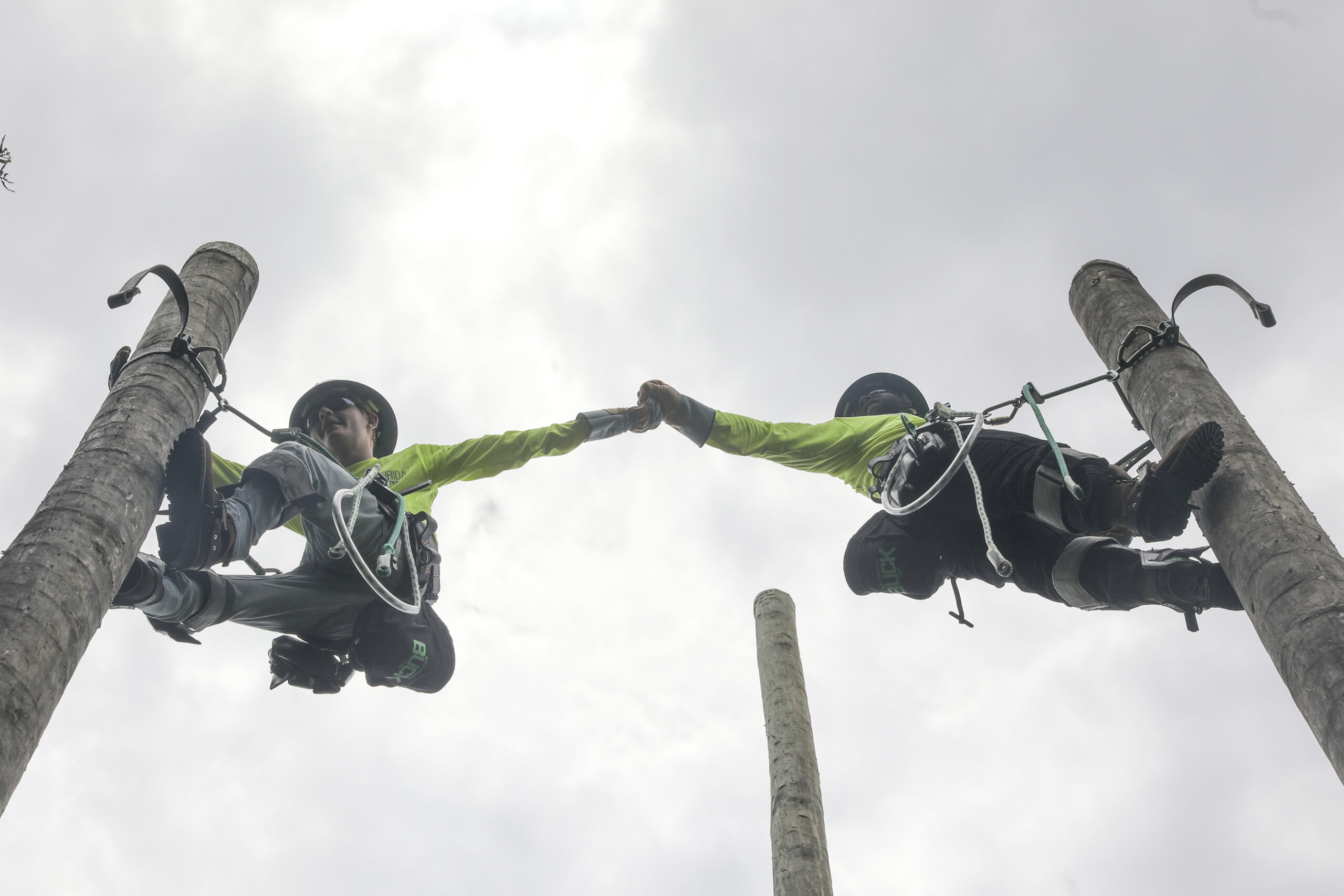