Piper Hutchinson isn’t opposed to gambling. But the 25-year-old political communications major says she was “really concerned” with the email she received in January from the athletic department at Louisiana State University.

The message, which was also sent to a large number of LSU fans, encouraged recipients to download the Caesars Sportsbook app. The subject line: “$300 in Free Bets Await.” Hutchinson, a senior, says universities shouldn’t be encouraging their students to gamble.

“There needs to be a line between the business aspect of athletics and the academics of a major flagship university,” she said.

As March Madness kicked off last week, that line is getting increasingly blurry on campuses in the roughly 30 states across the country where online sports gambling is now legal. To date, LSU is one of at least seven schools, including University of Maryland, University of Colorado and Michigan State University, that have reached lucrative advertising agreements with betting apps like Caesars Sportsbook and PointsBet.

Under the marketing deals, sports betting apps are paying to have their names mentioned during radio broadcasts, highlighted on schools’ mobile apps and displayed inside arenas and stadiums for fans and TV viewers to see. On a recent night inside LSU’s Pete Maravich Assembly Center, an ad for Caesars Sportsbook flashed alongside the court. On the school’s sports radio network, an announcer provided “your Caesars Sportsbook scoreboard update.” There’s also a new Caesars Sportsbook Skyline Club at the football stadium.

“In certain parts of the country, we see that college sports is more popular than pro sports,” Dan Shapiro, chief development officer at Caesars Digital, told the Sports Business Journal in October.

In Colorado, college athletes have signed endorsement deals with MaximBet, a gambling app. Such agreements, once verboten, were made possible last year when the NCAA removed its restrictions on student athletes earning money from activities like social-media posts and autograph signings.

Michael Schreiber, founder and chief executive officer of Playfly Sports, which manages media rights for college athletic departments, including deals with sports betting companies, says the growing acceptance of gambling among colleges is similar to how schools now allow alcohol inside stadiums after years of banning it. Sports gambling, he said, has “become more of a social norm.”

The agreements are helping colleges fill holes in their budgets created by the pandemic and allowing sportsbooks to reach a key demographic of college sports fans—many of whom will place wagers this month during the NCAA’s March Madness tournament. Last year, nearly 50 million people were expected to bet on the college basketball tournament, with the number of people gambling on the games through an online sportsbook tripling compared to 2019, according to the American Gaming Association.

But the advertising deals have raised concerns about promoting betting to college-age students who may be vulnerable to addiction. Several states and universities restrict betting on college games. While the NCAA allows marketing deals between schools and sports betting apps, it still prohibits gambling by college athletes, coaches and administrators. At a congressional hearing in July, Heather Lyke, the athletic director at the University of Pittsburgh, said lawmakers should ban betting on college sports altogether, saying “gambling creates pressures and temptations that should not exist” and will ultimately “have a corrosive and detrimental impact on student-athletes and the general student body alike.”

“It’s not unreasonable to foresee students gambling away financial aid or work study money on the ‘big game,’” she added.

Christine Reilly, senior research director of the International Center for Responsible Gaming, a casino-backed organization, said the group is currently looking at whether the legalization of sports betting is creating more gambling addicts. She said the group is particularly concerned about 18- to 25-year-olds who are “prone to getting involved in addictive activities.”

“Your brain is not fully formed until you’re like 26, so kids in that group have a lot of vulnerability to developing these problems,” Reilly said.

Without a nationwide law restricting gambling on college sports, a patchwork of state laws and school policies has emerged. In Virginia, Oregon, New Jersey and New York, it’s illegal to bet on games played by in-state colleges, even though online sports betting is now legal in those states. A few universities—like Purdue, St. Joseph’s and Villanova—have banned students, faculty and staff from gambling on their schools’ teams.

Last year, the National Council on Problem Gambling issued guidelines for marketing deals between colleges and sportsbooks. Among its “key safeguards,” the council said, was that gambling companies shouldn’t pay schools based on how many people they help sign up. But in at least one deal, between the University of Colorado and PointsBet Holdings Ltd., the school gets $30 for each new customer it sends to the betting app, according to Sports Illustrated.

Timothy Fong, a psychiatrist and director of the Gambling Studies Program at the University of California, Los Angeles, said he isn’t that concerned about ads for sports betting apps inside college arenas. But he worries about universities directly encouraging students to use them.

“If they’re telling LSU students, ‘Sign up for this app’ and not giving them any gambling addiction information that’s really problematic,” Fong said.

In a statement, Caesars said its deals with LSU and Michigan State “are focused on reaching the large base of alumni and over-21 fans,” and the company has promised “not to target those under 21.” Caesars is working with LSU and the state of Louisiana to prevent gambling disorders and is creating scholarships for students at both schools who want to pursue a career in sports, a spokesman said.

Cody Worsham, a spokesman for LSU’s athletics department, said anyone who entered an email address to get tickets to LSU games got the Caesars Sportsbook promotion. He said sending the email to fans who are under 21 was “a mistake” and the process of approving the email “was not followed the way it should have been.”

“We’re putting more robust procedures in place to ensure that our commitment to not market to students who are under 21 will be fulfilled,” he said. He added that LSU’s athletics department is teaching athletes about how to comply with gambling rules and working with the state department of health to educate students on how to gamble responsibly.

The email promoting Caesars betting app sparked a range of reactions from LSU students. Brandon Barrient, a 20-year-old junior, didn’t think the school’s marketing agreement was a big deal, likening it to beer commercials on TV being shown to people who may be too young to drink. “I think some people are hesitant about change,” he said.

But Joe Kehrli, the sports editor for the student newspaper, said some students who got the email were under 21, the legal age to gamble in Louisiana. “It was seen as an opportunity to take advantage of the students,” Kehrli said.

LSU Communications Professor Robert Mann said the email “shows a shocking lack of regard” for the well-being of vulnerable students. “They’re inviting students to gamble on LSU athletics,” he said. “It just feels too close for comfort.”

Charlie Stephens, an LSU junior, said the email was “really odd” for a university that purports to have its students’ best interests in mind. But he added that he has a sports betting app on his phone and sees legalized sports betting as better than the underground alternatives, which plenty of kids were using before it was legal.

“I’d love to see the Tigers win and make some money at the same time,” he said. 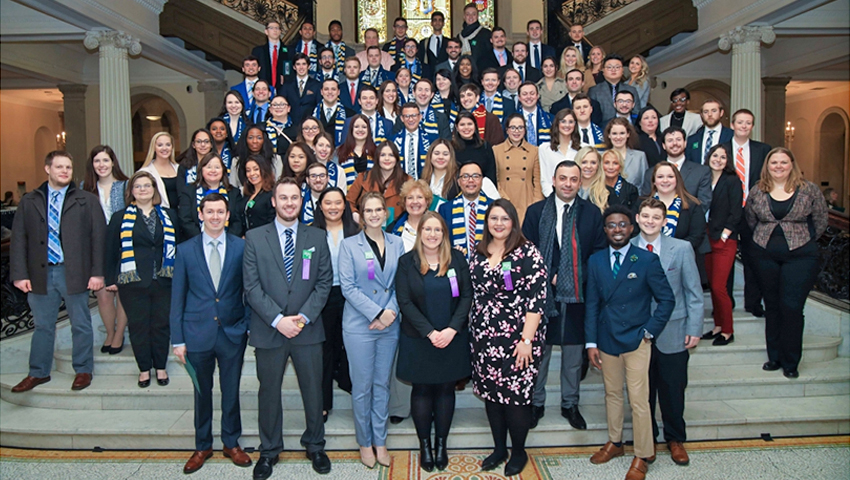