Speaking during a Kenya Kwanza rally in Baringo County on Sunday, February 13, Ruto pointed out that only select individuals close to the President or his family would get lucrative positions within the government.

The Deputy President warned that this culture ought to stop – hinting that his government, should he be elected, will be the solution to such nepotism and favouritism in the country.

“You are already a powerful figure in the country and you take your family members and give them government jobs. That culture must stop in Kenya, we must have a country that shares opportunities evenly so that even the minority can be part of the decision-making process in our country,” Ruto stated.

The DP added that his government would give priority to the minority groups and communities in order to create equal opportunities for all Kenyans.

“We are committing that we are going to escalate to a fully-fledged commission on matters minorities so that the issue of minorities can be brought to the center of government and minorities stop living in the fringes of our society and they are incorporated properly in all the affairs of the Republic of Kenya,” he noted.

Flanked by his Kenya Kwanza counterparts, Musalia Mudavadi (ANC) and Moses Wetangula (Ford-Kenya), Ruto noted that he would bring the requisite resources to Baringo to address the prevalent issues of insecurity and banditry.

His troops on the other hand, took on the Head of State, accusing him of pitting the ODM leader Raila Odinga as his preferred successor.

“We are telling you Uhuru, you have disgraced yourself and the State House. Presidents such as the Late Moi campaigned for you but did not go to such lengths. Please respect the institution of the State House,” Elgeyo Marakwet Senator, Kipchumba Murkomen, stated in an earlier rally.

“We are telling you Mr President to remove the politics from State House and come here on the ground so that we can meet face-to-face,” Kakamega Senator, Cleophas Malala, added.

The remarks come at a time when the political battle is shaping up in what will be a hotly contested race for the top seat in the 2022 General Election. 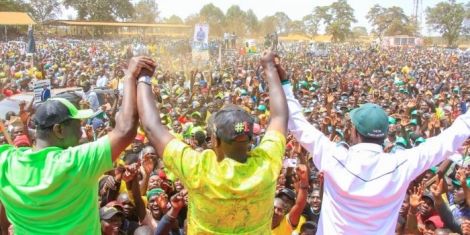 Battling insurers after Hurricane Ida? Here’s what to know about claims, estimates and how to avoid getting scammed | Sponsored: LaHatte Law, LLC

Fri Feb 18 , 2022
Editor’s Note This article is brought to you by LaHatte Law Firm, LLC. The last month has been a busy one for New Orleans based local attorney Joey LaHatte. In the weeks since Hurricane Ida struck, he’s been helping area residents deal with insurance companies and ensure they receive all […]