Pima County Constable Kristen Randall, known for her efforts to help people being evicted during the COVID pandemic and dubbed the “rebel eviction-enforcer,” announced her resignation Monday evening.

Randall, the constable for Justice Precinct 8 and chosen as the associate presiding constable by her peers, was part of a wing of the Constables Office who have worked to shift policies toward a “housing-first mentality,” alerting tenants about pending evictions and connecting them to housing assistance resources.

While the Constables Office has often been marked by elected officials taking to heart their role as quasi-law enforcement officers, carrying out evictions while armed and wearing body armor and tactical clothing, Randall has approached her job as a social worker, attempting to blunt the sting of evictions by helping people find aid and temporary housing.

Randall announced her resignation in a Facebook post, writing that she would leave the office by Feb. 13, and seek “other options for serving my community in a way that is
constructive, positive, and more impactful.”

Randall is leaving an office roiled by controversies, with others among the elected constables having been suspended from their posts by the Board of Supervisors, and another facing a potential criminal investigation over his zealous pursuit of evictions.

There are nine constables in the county, who are limited law enforcement
officials elected from each justice precinct to serve orders of
protection, evictions and other court documents from the justices of the
peace. Randall served evictions and protection orders in Justice Precinct 8, which
covers much of midtown Tucson, running from County Club Road east to
Wilmot Road, and north from River Road to Golf Links Road.

Randall applied for the job after her predecessor retired before her term expired, and was appointed to the position by the Pima County Board of Supervisors in April 2019. In 2020, she ran for the position, and was elected that November.

“I never expected this position to be easy, or one that I could ‘leave at the office’ when I finished for the day,” Randall wrote in her resignation letter to the Pima County Board of Supervisors. “This job grew as I grew, and it became a mission for me to explore solutions based on my own lived experience,” she said.

“My time as constable of Justice Precinct 8 is something I am extremely proud of,” she wrote.

Asked what her plans are, Randall told the Sentinel “I don’t know exactly. I have a few irons in the fire but nothing certain.”

Randall’s resignation comes as the Constables Office faces major changes, brought on by the the COVID-19 pandemic and a wave of evictions, as well as pressure to shift the elected office to one managed by Pima County administrators.

“Doing the pre-eviction notices has always been tough, but I feel like it’s gotten harder,” Randall wrote on Sunday. “Affordability of housing is what everyone talks about, and the despair shines through their eyes as they face an uncertain and sometimes grim future.” 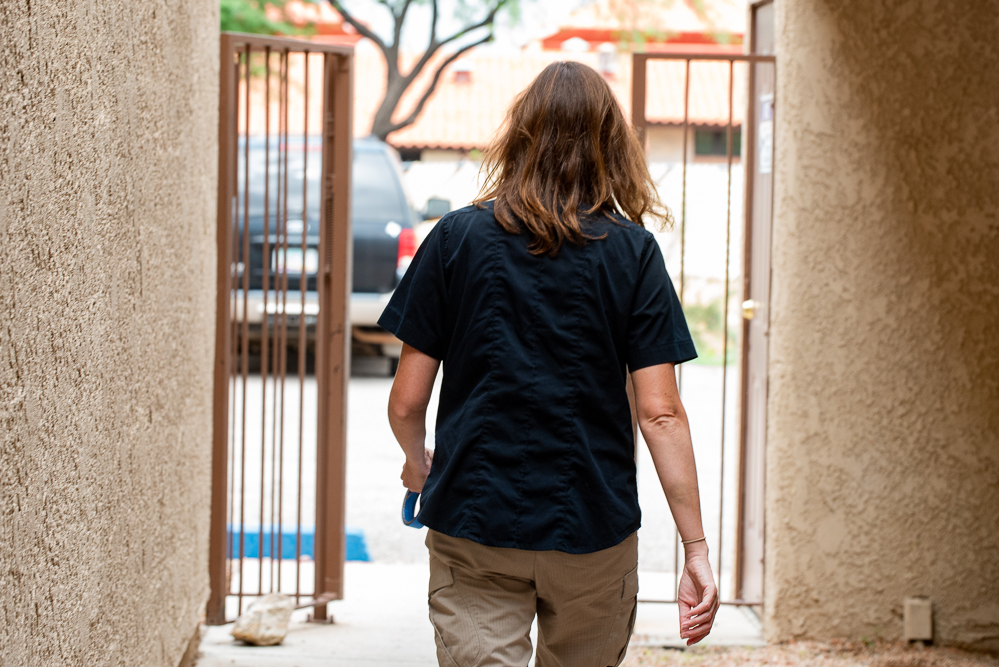 During her tenure, Randall was able to shift the office’s policies to some degree, slowing down the evictions process for hundreds of people, carving out a position for a social worker who could help mitigate homelessness, and seeking help for people facing substance abuse and mental health issues. Nahrin Jabro, who began working as a social worker for the constables last January, now works for a separate Pima County program that offers support for people facing eviction.

Randall joined the office before the COVID-19 pandemic, but by the summer of 2021, it became clear that hundreds, if not thousands of residents in Pima County could face eviction after a CDC order blocking evictions was slated to end.

In July, Pima County announced the creation of Emergency Eviction Legal Services as part of a larger effort to mitigate or prevent evictions in the county, backed in part by federal funding under the American Rescue Plan Act, passed by Congress in March. As part of the $1.86 trillion bill, the federal government allocated $21.6 billion for emergency rental assistance. Of that, an estimated $787 million went to Arizona to cover housing expenses, and about $102 million went directly to Pima County, with another $102 million expected.

By August, Pima County and the Tucson city officials have managed over 16,000 prevention requests and earmarked nearly $21.5 million in funding to cover rental payments and utilities.

In December, the Board of Supervisors agreed to spend $425,000 on the program, approving a one-year contract with four private law firms to try to keep people in their homes by seeking rent assistance, negotiating with landlords, and offering legal advice.

Managing homelessness has become a major part of Tucson Mayor Regina Romero’s agenda. During her State of the City speech in December, Romero highlighted the city’s efforts to hire a Housing First director to “coordinate providing low or no barrier permanent housing to people experiencing homelessness with wrap-around services including mental health support” and said she make affordable housing a “top priority.”

Randall’s replacement will be determined by the Pima County Board of Supervisors, who must under state law fill her post with another registered Democrat who lives in the precinct.

“I have collected fulfilling experiences as well as terrible,
life-changing ones that I will carry with me for the rest of my life,”
Randall wrote. “I will always look back and remember how we demonstrated
different ways to do things, how we could reach out and become a
community resource in our generation’s most trying times and build
bridges with others who share similar missions.”

“A constable
has a duty to do everything they can to serve the people of their
precinct in a way that is legal, ethical and unbiased, but I also
believe – in a way that is compassionate, nimble, determined and just,”
Randall said. “There is a great divide between my vision of what a
constable should do and between the accepted practice of others. When a
force for good can so easily be a force of pain and destruction, we
should examine how this archaic position can better fit the needs of a
changing community.”

“I want to thank everyone who supported
the mission throughout these difficult times, either through votes,
invitations to speak, covering these issues in the media, through
donations, or simply by becoming more knowledgeable about the
complicated lives of people sharing these hard times,” she wrote. “Thank
you, and may the work continue.”

“I apologize that my resignation is not due to a torrid sex scandal, pending criminal charges or a need to go hike the Appalachian Trail. It’s all pretty banal stuff,” she wrote online. “I promise you that my commitment has not wavered, and whatever I do next will come complete with my usual stubborn determination.”

Constable Oscar
Vasquez, in JP 4 on the West Side, was suspended for six months from July to December after he
refused to carry out an eviction of a mother and her children, despite a
court order, and for a pattern of misbehavior including speeding in a
county vehicle, and following and yelling at someone who almost hit his
car.

George Camacho, constable for JP
9 on the South Side, faces a review by the state’s Constables Ethics Standards and
Training Board following complaints that he threatened former constable
Joe Ferguson late last year at a South Tucson bar.

Ferguson, a former reporter for the Arizona Daily Star and a now member of TucsonSentinel.com’s Board of Directors, was appointed as a constable in January 2020 and faced Camacho during the Democratic primary later that year.

“This
is separate from the other complaint regarding the posting of simulated
eviction notices,” wrote Mark Napier, the assistant county
administrator and former Pima County sheriff, in a memo to the Board of Supervisors on Jan. 20. “This matter is
potentially criminal,” Napier wrote, adding that the complaint was sent
to Maricopa County to clear the county of potential conflicts of
interest.

Around the 2020 election, Camacho was prohibited from
carrying a firearm by a Superior Court judge after he was accused of harassing a woman who worked in the Constables Office on multiple occasions.

Our students are overburdened with exams and yet end up unfit for jobs. Why?

Tue Feb 1 , 2022
A mismatch between university education and desired skills in the job market is leading to educated unemployment 01 February, 2022, 11:30 am Last modified: 01 February, 2022, 11:30 am Md Kawsar Uddin. illustration: TBS “> Md Kawsar Uddin. illustration: TBS Although Bangladesh has made remarkable progress in expanding access to […]