Here are some people who had profound influence on Lata didi’s life. In her own words:

Pt Dinanath Mangeshkar: “My father was a huge influence in shaping me into the singer that I became. He taught me music. My elder sister Meena and I learnt music from our father. The other siblings were too young when he died. My brother Hridaynath was only four when my father passed away. My father didn’t see me become a playback singer. But he had predicted my success. After his death I learnt music from others. But I consider my father my true guru. I don’t think I’d have become a playback singer if my father had lived. He wouldn’t have allowed it.”

KL Saigal: “I never met him. I only saw him in his films. When I arrived in Mumbai in 1945, Saigal saab had left the city. But I idolized him from my childhood. After my father my greatest influence was Saigal saab in music. I’d sing all his songs. Our family lived in a small town called Sangli. We’d see his films in the nearby theatre. My father also liked Saigal saab’s music and films. Saigal saab passed away in 1947. It is one of my life’s biggest regrets that I never met him.”

Master Ghulam Haider: The credit for giving me my first major break goes to Master Ghulam Haider. Incidentally Shashadhar Mukherjee later admitted to me he was wrong about my voice and crazy to have rejected me. I sang for many of his films including Anarkali and Nagin.

Madan Mohan: “We sang a duet Pinjre mein bulbul bulbul bole’ together in Shahid for Master Ghulam Haider. That song about a brother and sister singing together, never got released. One day suddenly he came up to me and said, ‘Tum raakhee baandhne nahin aayee mujhe?’ From that day he was my Madan Bhaiyya. I was close not only to him but to his entire family. I am still very close to Madan Bhaiyya’s son Sanjeev Kohli.”

Chitragupta: “I was very, very close to Chitragupta. We were constantly in and out of one another’s homes. Interestingly Madan Bhaiyya used to live in a bungalow in Khar. I spent many evenings there with him and his family. When he moved out of that bungalow Chitraguptaji moved into the same bungalow. Mehboob Studios was very close to this bungalow. So right after recording at Mehboob I’d rush to spend time at that bungalow first to meet Madan Bhaiyya and then Chitragputaji.

I used to meet Chitragupta almost every day, not only in Mumbai but also in other cities like Chennai and Bangalore. We were one big group of friends Chitraguptaji, Dilip Dholakia, my sister Usha. I’d have a meal regularly at his home. Bhabhi (Chitragupta’s wife) made wonderful Bihari food. They would also come regularly.”

Pandit Narendra Sharma: I used to call him ‘Papa’. He was a learned man. I’d spend hours listening to him. Papa stayed in Khar. I’d visit his home. My ties with him and his family were very strong. His three daughters were my age. I’d carry extra clothes to his home and stay overnight. His daughters and I would do dhamaal all night. He called me daughter but always addressed me as ‘Lataji’. I objected to that, but he persisted.

Majrooh Sultanpuri: “He was close not just to me but my entire family. He was also very close to my brother Hridaynath. He wrote an entire poem about my voice. He called me ‘Bibi’ which in Urdu meant a ‘good woman’.

Kishore Kumar: “I tied a raakhi on him just before his death at a concert in London. He came to me early in the morning on raksha bandhan. He sat on the floor and went through all the rituals.”

S.D Burman & R D Burman: “Burman Dada was very fond of me. It’s a well-known fact that he made kheer but invited no one to eat except me. He would offer me special paan which was flavoured with dry orange peel…I was closer to Pancham (R D Burman) than his father. When he married my sister (Asha Bhosle) he told me to write him a letter as a wedding gift which he stored away in his bank locker.

I know Pancham was very unhappy in his final years because of the way his career had gone. I had the privilege of singing in his last film as a composer 1942: A love Story. He sent me a message to sing. But then he passed away. I sang his composition ‘Kuch na kaho’ after his death.

NYC Plans to Stop Homeless People From Sheltering on Subways

Sun Feb 20 , 2022
Mayor Eric Adams and Gov. Kathy Hochul announced on Friday an aggressive plan to deploy police officers and mental-health workers into New York City’s subway, pledging to remove more than 1,000 homeless people who shelter there regularly, some of whom have contributed to escalating violence and harassment in the system. […] 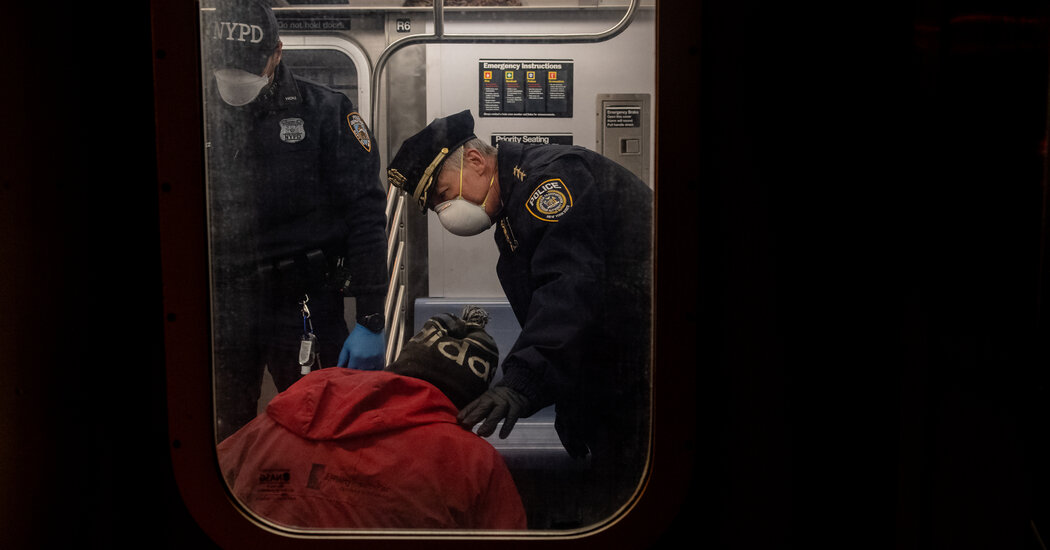