The Act on Fashion Coalition, a group of fashion and sustainability focused organizations, recently held a virtual press conference and panel discussion on a proposed new law, the Fashion Sustainability and Social Accountability Act (S7428/A8352). The new bill, currently at the committee stage of the State legislative process, aims to hold fashion brands accountable for the environmental and social impacts of their manufacturing, and is sponsored by State Sen. Alessandra Biaggi (S.D. 34) and Assemblywoman Dr. Anna Kelles (A.D. 125).

If passed, all apparel and footwear retailers and manufacturers with global annual receipts of at least $100 million doing business in New York State, would be required to map their supply chains, disclose environmental and social impacts, and set binding targets to reduce those impacts. Impact reductions include mandatory science-based targets, and ensuring the fashion industry operates within the bounds of the Paris Climate Agreement.

During the event, Biaggi, who represents parts of The Bronx and Westchester counties, said she has had a passion for issues surrounding fashion law since attending law school. In fact, Barbara Kolsun, professor of fashion law at Cordozo Law School and the senator’s former professor and mentor in this field, also attended the press conference and spoke to the importance of the issue of sustainability.

“The time has come for bold legislation, starting right here in the center of the fashion world,” said Kolsun. “Our multi-million, trillion-dollar industry, which employs so many New Yorkers, has been and should continue to be on the cutting edge of finding solutions to these problems.”

Biaggi said she first connected with NSI, an organization that uses data to tackle the issue of sustainability in the fashion industry, about a year prior to beginning the work on drafting the new legislation. “We looked at issues that a lot of industry leaders have been working [on] to address things like strengthening labor practices, lowering carbon emissions, and really we set out to tie all of these things together and to create industrywide standards that enact real change within the field,” she said.

The bill’s advocates say apparel and footwear are responsible for an under-acknowledged part of global greenhouse gas emissions. Unlike other heavy polluting industries such as the auto sector, fashion retailers and manufacturers operate in a regulatory-free vacuum. This has led to a global race to the bottom, where the companies that have the least regard for the environment and for workers have the greatest competitive edge.

Maxine Bédat, founder and director of NSI, said that while the fashion act is a New York bill, it has global reach because it applies to all fashion companies that sell products in New York that have a global revenue of over $100 million. “This bill, the fashion act, is a critical tool to both avoid our human-caused, climate crisis and end fashion’s race to the bottom of labor exploitation,” she said. “In so doing, will make New York a fashion leader really fit for the 21st century.”

According to Bédat, the fashion industry’s carbon footprint is between 4 and 8.6 percent, while the carbon footprint for the United States as a whole is around 11 percent. “By requiring companies to achieve science-based targets, it means that the pace of reduction will be in line with the Paris [Climate] Agreement,” Bédat said. “Anything less than this means that the fashion industry is not operating within the bounds of the planet.”

For her part, Kelles, who represents parts of Tompkins County and the southwest of Cortland County, said global energy and greenhouse gas emissions needed to be reduced by 50 percent by 2030, just eight years from now, to prevent the extreme negative effects of climate change. “It’s essential that we ensure the industries are practicing ethical standards in labor and environmental sustainability, while at the same time, ensuring a thriving statewide fashion industry,” she said.

At an earlier event also organized to discuss the new bill, Kelles had explained that the fashion industry was responsible for a staggering 4 to 8.6 percent of global greenhouse gas emissions and had been permitted to operate unchecked by regulations that, if implemented, would curb pollution as well as the use of exploited, forced, and child labor.

Bédat added that the act sets a standard for operation which ensures that companies which implement sustainability goals will not end up at a disadvantage, compared to other companies which may not act as sustainably. “This part of the bill will spur the collaboration that we are, so far, not seeing amongst companies, to work with common suppliers to help finance energy efficiency upgrades, and alternative energy sources,” Bédat said. The fashion act also requires companies to complete mandatory due diligence when it comes to the social and environmental policies they implement.

“[The fashion act] requires fashion companies to identify, prevent, mitigate and account for actual and potential, adverse, social and environmental impacts in their supply chain,” added Bédat. “Material disclosure will be the best way that we can ensure that this economy is actually being created.”

Additionally, companies which do not comply with the standards set under the fashion act will have to pay up to 2 percent of their revenues in fines. Proceeds from such enforcement will go towards disadvantaged communities. In this context, Biaggi said, “As one of the global fashion and business capitals of the entire world, The State of New York has really a moral responsibility to lead in mitigating the environmental and the social impact of the fashion industry.”

At the press conference, the panel comprised members of the coalition as well as important figures from both the worlds of sustainability and fashion. Among the speakers was Gabrielle Ferrara, chief operating officer at Ferrara Manufacturing, who spoke about her company’s policy that “environmental and social sustainability go hand in hand.”

Meanwhile, Tom Chappell, co-founder of “Tom’s of Maine,” a personal care product company, and “Rambler’s Way,” a wool clothing company, shared his support for the act, along with his experience of sustainability in manufacturing. Mazeda Uddin, founder and CEO of SAFEST, a nonprofit that helps south Asian immigrants with job training and guidance, spoke about her work with worker advocacy in the garment industry in Bangladesh.

Rachel Rivera, a climate activist and member of New York Communities for Change, an organization that focuses on creating change in low and middle-income communities, discussed her experience of surviving Hurricane Sandy and her work with environmental activism. Climate activist and executive director of UPROSE, Elizabeth Yeampierre, spoke to her organization’s work in promoting sustainability through community organization, and her experience with the health disparities experienced by certain communities, and how that can connect to climate change.

Other supporters of the bill include Stella McCartney, British fashion designer and animals rights activist, who spoke at a previous event on the bill, saying, “To be truly modern, people must initiate and embrace change.” She added, “Fashion is one of the most harmful industries to the planet. Collectively, it’s crucial that we, as an industry, commit now to taking measurable action towards mitigating our impact for a more sustainable, ethical and mindful future. The Fashion Act is an example of a step towards a better, more regulated future. Our duty is clear, and now more than ever, we need to make changes to the way in which we do business.”

Kelles credited the speakers present as well as other members of the coalition for putting in the work that she said would help the fashion act become successful. “The industry is primed and ready and there are already old champions, some of them who are here with us today, who are taking clear steps to both acknowledge, but also to make change in [a] global, critically important industry that literally puts clothes on our backs, shapes cultures,” she said. “To me, most importantly, it embodies our inner sense of self.”

Thanks to a number of recent documentaries like “The True Cost,” and “Alex James: Slowing Down Fast Fashion,” the world has gradually become more aware of the impact of fashion on human rights, on the economies of lesser-developed nations, and on the environment. Indeed, acclaimed author, Naomi Klein, first wrote about the issue in her 1992 bestseller, “No Logo.”

Outside of the luxury fashion brands, Swedish clothing company, H&M, has, for several years now, operated its own in-house, sustainability program to offset the impact of its manufacturing on climate, offering deals to customers who return fabrics / old clothes to their stores, and later selling “new” recycled clothes.

An extract from the store’s website reads, “Let’s face it. While we love fashion, it has a huge impact on the environment. The industry has to change, and someone has to take the lead. So, let’s be that someone. Let’s see how much more efficiently we can collect and recycle unwanted clothes on a global scale. Let’s find out how little waste we can create. Let’s remove all unnecessary plastic. Let’s take away any hazardous chemicals. Let’s accelerate innovation of sustainable materials.”

In 2005, Bono, lead singer of rock group, U2, and co-founder of the Red campaign which engages businesses and people in the fight to end AIDS, along with his wife, Ali Hewson, launched the fashion company, Edun, as reported by The New York Times, among other outlets. Through a partnership with entrepreneur, Renzo Rosso, a philanthropist and founder of the Diesel clothing group, fashion products, sourced or made entirely in Africa, would be sold in Diesel stores under the Diesel+Edun label.

Meanwhile, in Brighton, England, The Body Shop, seller of cosmetics and other beauty products, was founded in 1976 by Dame Anita Roddick, who died in 2007. Through Roddick’s passion for the planet and campaigning for numerous causes, The Body Shop was always more than just a beauty brand. According to the company, the products were not tested on animals and did not exploit anyone in making them. Instead, they worked fairly with farmers and suppliers, and helped communities thrive through their Community Fair Trade program.

Wrapping up the session on the new Fashion Act, Alejandra Pollak, director of operations at NSI, said it was a “groundbreaking” way to hold the fashion industry accountable to its environmental and workforce claims. “On behalf of New Standard Institute, I would like to thank the early supporters of this bill and the members of the Act on Fashion Coalition for demonstrating great leadership and courage in being among the first to endorse this groundbreaking legislation,” she said.

“We recognize it’s a long road ahead, but we’re grateful to be working with all of you to continue to grow our coalition, and to build the public support and political will to pass the fashion act in this session,” Pollak said.

Meanwhile, Bronx Fashion Week takes place in person this year on May 7, 2022.

*Síle Moloney contributed to this story.

Meet the Lawyer in Charge of Saving Roe v. Wade

Thu Mar 24 , 2022
The night before Julie Rikelman was scheduled to argue before the Supreme Court for the first time, she hardly slept at all. But it wasn’t nerves that kept her up. It was a persistent fire alarm at the Washington, D.C. hotel where she was staying. It went off again and […] 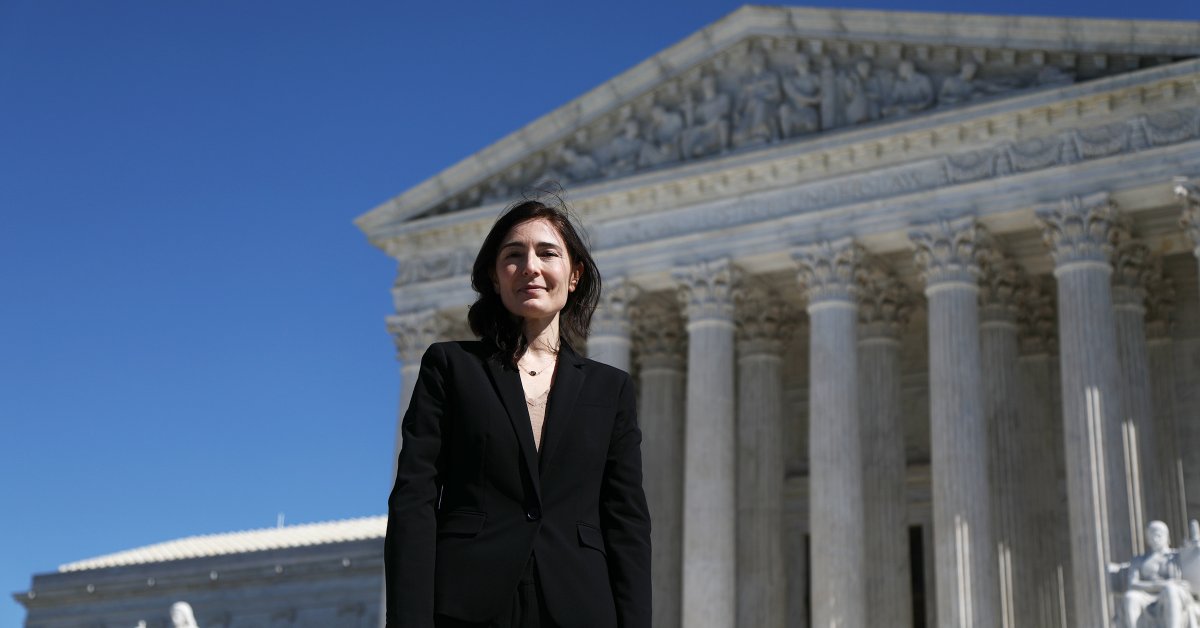