Levels of employment for the insurance industry are “holding up much stronger than the overall economy,” the leader of an insurance search firm said recently, reporting that insurers have added almost 20,000 jobs since March 2020.

The actual number, 19,700 jobs, according to U.S. Bureau of Labor Statistics, represents a 1.2 percent increase in employment levels in the last nine months, said Greg Jacobson, chief executive officer of The Jacobson Group, during a webinar earlier this month.

Focusing on the difference between the insurance labor market and the overall labor market using BLS data, Jeff Rieder, head of Ward Group, a unit of Aon, said because the insurance market has lower unemployment “and there still remains a very high demand for labor, that could [mean] an impact on compensation” in the insurance industry “that will be perhaps a bit different than what we see in the rest of the economy.”

Jacobson confirmed this. “We’re seeing far in excess of CPI [the consumer price index] in terms of raises and increases in compensation,” he said, noting that for some industry niches, competition for talent is pushing compensation levels up dramatically. Compensation increases will be “substantial,” he said. “We’re not seeing anything like CPI in terms of wages increasing ” in the insurance industry. “It’s much higher.”

Jacobson and Rieder co-hosted the webinar to present findings of the Semi-Annual U.S. Insurance Labor Study conducted by the two companies—a survey of carriers employing roughly 200,000 workers. The survey reveals how much hiring they expect to do, what positions they’re most interested in filling and what levels of experience they are seeking, among other things.

As for hiring expectations, 56 percent of insurers surveyed in January 2021 said they expect to increase staffing levels over the next 12 months, and two-thirds expect revenue growth.

A year ago, a similar study revealed a slightly rosier picture, with 61 percent of carriers anticipating additions to staff, but the figure fell to 50 percent in July of last year. In July, 17 percent of insurers surveyed said they were expecting to decrease staffing. The figure has fallen to 9 percent, driven by the property/casualty segment, where carriers are anticipating market share growth and increased revenue.

Jacobson and Rieder noted that P/C responses are overweighted in the overall survey figures because 86 percent of the responses are from P/C insurers. Also, there were slightly more regional than national or multinational respondents, with regionals making up 55 percent of the respondent universe. The survey results represent roughly a 50-50 split evenly between carriers with less than 300 employees and those with more than 300. 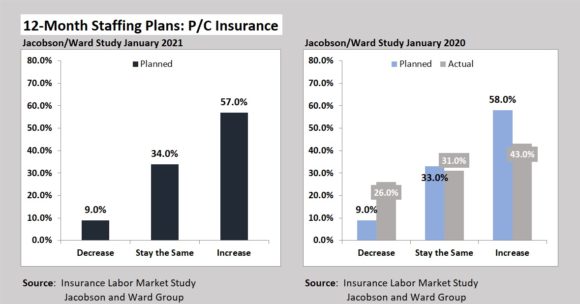 “We’ve never seen this much of a drastic change between what was predicted and what actually happened,” Jacobson said, referring to figures for P/C and for life/health. Noting that the BLS numbers capture agents, brokers, TPAs and other service providers in addition to carriers, he said that “the steady growth” in jobs was still on the carrier side, and more on the P/C side than the life/health side of the industry.

Both P/C and L/H insurers reported more actual decreases in staffing in 2020 than they had planned on at the beginning of last year. Only 9 percent of P/C carriers expected to cut staff according to the January 2020 survey, but 26 percent actually did.

In fact, survey results indicating the percentages of P/C carriers planning increases and decreases in 2021 remain nearly identical to the planned staffing changes reported in January 2020. For example, 57 percent of P/C carriers plan to increase staff in 2021, compared to 58 percent for 2020. In contrast, there is a significant drop in the percentage of life/health carriers are planning staff additions for 2021, compared to 2020. (Chart below) 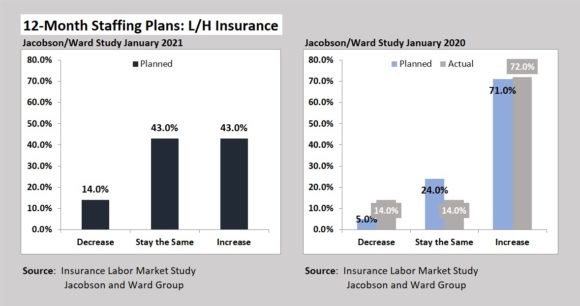 Breaking down the P/C survey results further, Rieder noted that 72 percent of P/C personal lines carriers expect to increase staff during the next 12 months. That compares to 50 percent of P/C commercial carriers and 54 percent of P/C balanced carriers.

In July, only 48 percent of small carriers expected to increase staffing within a 12 month time frame. The January survey now puts that percent up at 61 percent. Large companies, on the other hand, haven’t changed their expectations since last summer. In July, the survey takers reported that 47 percent expected to increase staff over the next year. In January, the figure actually dropped slightly to 44 percent.

Noting that 17 percent of large companies are anticipating staff decreases, Rieder said that he’s aware of some large companies offering early retirement options. “That’s been one of the interesting changes in the pandemic—it has provided an opportunity for many companies to offer early retirement options to staff that’s older and more experienced. It’s afforded them the opportunity to take those options,” he said.

Where The Jobs Are

Rieder reported the functional areas that P/C carriers plan to beef up. The top five by type of insurer are summarized below. 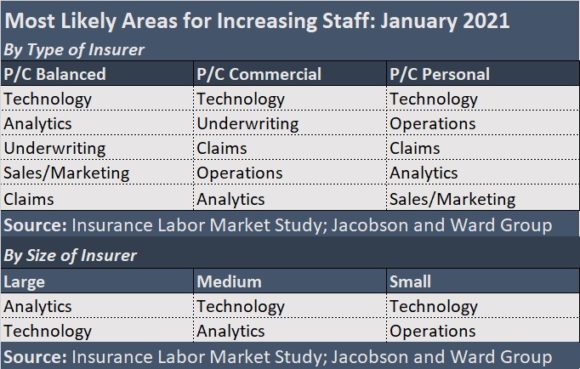 Rieder took note of the fact that when carriers were asked about the likelihood of staffing various positions this year, the claims function ranked lower than it had in the past. In fact, Carrier Management records of past Jacobson/Ward studies indicate that claims positions topped the want-to-hire lists of P/C personal lines carriers in 2016 and 2017, now ranking third for 2021.

“This may be a result of the fact that companies have automated a lot of their claims functions,” Rieder said, adding that the pandemic also contributed to having desk claims adjusters who can work from their homes and having less need for individuals out in the field.

Overall, recruiting difficulty continues for carriers looking to add staff, Jacobson and Rieder said. Seven of the 11 functional areas reported on in the study increased in recruiting difficulty compared to January 2020. Analytics roles are the most challenging to fill, followed by actuarial and technology, the survey results show.

Jacobson pointed out that some “corporate positions” that haven’t rated as challenging in the past—in operations, product management and compliance—while still not as difficult as the these data- and technology-intensive roles, are now near the highest levels of difficulty ever recorded in the Jacobson/Ward studies.

As part of this year’s survey, Jacobson Group and Ward also asked carriers what levels of experience they were seeking for various insurance roles, giving non-experienced job seekers a sense of where the entry level positions can be found.
Across the insurance industry, on average, 24 percent of available positions are expected to be entry level positions, Rieder said, noting that the figure is an increase from 17 percent reported based on the July 2020 survey. This indicates “a greater willingness among carriers to hire people with limited experience, particularly in client-facing roles, such as the claims call center and operations,” he said.

According to the data presented in the Jacobson-Ward 2021 survey report, the three occupations with the highest percentages of entry level positions available going forward are actuarial work, claims and operations. 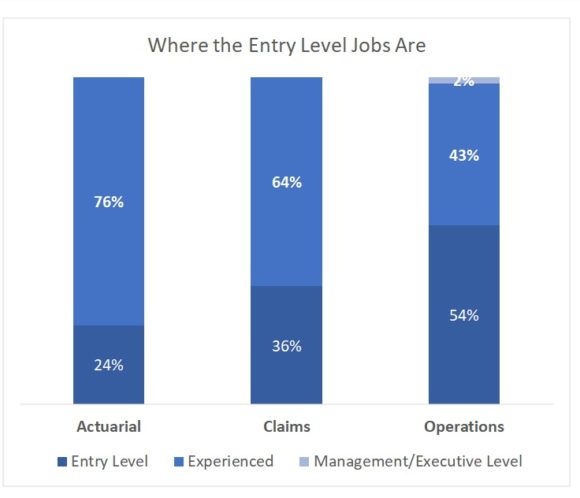 Reading further into some of the audience questions on this topic, Jacobson addressed the question of whether companies are expanding their nets—evidencing a willingness to hire people who don’t have college degrees and older employees nearing the end of their careers. “That would make sense” given the difficulty carriers are having in filling many types of positions, but he said his firm hasn’t seen a significant change in experiential job requirements just because the job market is tough.

Rieder said there is still a desire to pull talent from outside the industry, particularly in technology, marketing and digital experience roles. Carriers “have been actively trying to find individuals that come more from a Google, YouTube, Netflix, Facebook, etc. because those individuals have a better knowledge and working experience of what that digital experience means to the customer.”

Jacobson agreed that companies are asking to see candidates from other industries. “But we’re not seeing the trigger pulled,” he added. “In the end, the decision is often being made that we want someone with more direct [industry] experience,” he said. “I’m not saying that’s right. In fact, it may not be,” he added.

Addressing diversity, equity and inclusion initiatives for carriers, Rieder said those could prompt a greater willingness to hire individuals lacking industry experience, wondering aloud whether such initiatives had moved the needle on the availability of entry level experience revealed by comparing January 2021 and July 2020 survey figures. “It’s hard to find a company that is not focused on that right now. I think that will have a greater influence on pulling from outside the industry as well.”

Jacobson agreed. “Virtually every assignment we take on has a component of diversity built into it,” he said. But “companies have to become a little bit more flexible in terms of the experience in order to bring in that diversity,” he said.

This article was originally published by Carrier Management, which serves the P/C insurance C-suite.