ALBANY — The ethics officer for a state agency felt a colleague might be improperly steering a contract to a politically connected law firm.

Three days after the complaint was filed, a top aide to Gov. Kathy Hochul allegedly instructed Woods to resign. Hochul’s director of state operations, Kathryn Garcia, allegedly told Woods that her services were “no longer needed.” And less than three weeks later, Saren was fired from her longtime job at the Insurance Fund — also without explanation.

Saren has filed a lawsuit against the state, contending that her “retaliatory termination” was “executed with the knowledge and approval of Gov. Kathleen Hochul’s Executive Chamber.” The state Court of Claims lawsuit, filed in mid-March, contends Saren was fired simply for “doing the job that she was hired to” — to report unethical behavior.

The unrest at the obscure state agency played out during the hectic early weeks of Hochul’s tenure, which began Aug. 24. Citing the ongoing litigation, the governor’s office declined to comment on the allegations or Garcia’s alleged involvement.

One of the three-person firm’s partners, Camille Joseph Varlack, had been a high-ranking attorney in former Gov. Andrew M. Cuomo’s office from 2016 to 2019. Edwards had been a former colleague of Varlack’s in Cuomo’s counsel’s office, serving as assistant counsel for Taxation and Financial Services over the same three-year span. Denver Edwards, another partner in the firm, is not related to Tanisha Edwards.

In Saren’s complaint filed with the state Joint Commission on Public Ethics, there was no allegation that Tanisha Edwards would have personally benefited from her former colleague gaining a NYSIF contract. According to state law, however, it’s illegal for a state official “to secure unwarranted privileges” for themself or others — though it’s rare for the ethics agency to pursue the latter type of case.

JCOPE’s general counsel at the time, Monica Stamm, allegedly advised Saren that it was unclear Edwards had violated ethics laws. In addition, until mid-August, Varlack had been the Cuomo-appointed chair of the ethics commission, though she resigned a month before Saren filed the complaint.

As a result, Stamm allegedly advised Saren that it would be “cleaner” if Saren referred her concerns to the state Inspector General’s office instead of JCOPE. Inspector General Lucy Lang — who was appointed by Hochul in October  — has “entirely ignored” the issues raised by Saren over the past seven months, Saren’s attorney says. She has also heard nothing from JCOPE.

Lang’s office declined to comment. An Insurance Fund spokesman said he could not comment on pending litigation. Woods, Stamm and Tanisha Edwards did not respond to requests for comment.

NYSIF is a state agency and self-supported carrier of workers compensation and disability insurance; its purpose is to guarantee the availability of those products at the lowest possible cost to state employers. With premiums paid by policy holders, the fund makes substantial investments. As of last October, NYSIF managed about $21 billion in assets.

Beginning in 1986, Saren had a 23-year career at the state attorney general’s office, and according to her lawsuit was given the office’s highest award for “superior service by attorneys” in 2005. She joined the Insurance fund in 2009.

At NYSIF, Saren had dual roles: as its ethics officer and as the head of its Investment Compliance Department. According to the lawsuit, Edwards did not have any oversight of investment compliance in her position.

But last June, Edwards began raising concerns that the Investment Compliance Department was not adhering to a recommendation made during a prior outside review, concerning disclosure of possible conflicts when agency officials managed their personal portfolios.

According to Saren’s lawsuit, Woods was asked by the chairman of NYSIF, Kenneth Theobalds, to have an updated outside review done by a Minority and Women-Owned Business — a longstanding priority for Theobalds, who is Black.

Bruce Menken, Saren’s attorney in the lawsuit, contends Saren was not threatened by Edwards’ implicit criticism of her job performance — Edwards, he noted, was not Saren’s supervisor. If she hadn’t later filed the ethics complaint against Edwards, Saren could have been accused of being “asleep at the switch” in her role as ethics officer, her attorney told the Times Union.

In late August, Tanisha Edwards had a lunch at the pricey Odeon restaurant in Manhattan with the three partners of Bradford, Edwards & Varlack; the Insurance Fund’s deputy counsel, George Tidona, also attended. Everyone present was said to have paid for their own meal.

Afterwards, Tidona allegedly told Edwards that the law firm was “completely unqualified” for the work.

Tidona allegedly then told Saren he was “uncomfortable” with the lunch and follow-up discussions with Edwards, relaying that she had “yelled” at him when he recommended hiring other firms and had insisted on Varlack’s. Tidona also allegedly told Saren that that the law firm had first been referred to the agency staff by its chairman, Theobalds, who did not respond to a request for comment.

After NYSIF’s head of procurement suggested issuing a public “request for information” as part of the contracting process, Edwards allegedly said that was unnecessary, and wanted to narrow down the search to the Bradford team and two other M/WBE firms.

Edwards allegedly created her own specifications for an investment compliance review, pushing for an outside firm to conduct “full-blown and continuing oversight and management” of investment compliance, rather than the planned limited review. She allegedly tried to unilaterally have the solicitation expedited, have it only sent to the Bradford team and two other firms, and to set up a meeting between NYSIF’s chief investment officer and the Bradford firm.

On Sept. 21, Saren submitted the ethics complaint to JCOPE with Woods’ assent. The complaint stated that given Edwards’ lack of a formal role in the oversight of investment compliance, the agency was concerned her “aggressive championing” of the Bradford firm may have been an attempt to “improperly direct work to that firm.”

As part of her job, Saren had access to internal agency emails — and began seeing exchanges between Edwards and Hochul’s office that suggested Saren was about to be fired.

Edwards allegedly emailed a senior Hochul senior advisor, stating that NYSIF needed to hire an employee for the exact titles Saren held. Edwards then forwarded that email to Julia Kupiec, an ethics counsel to Hochul.

On Oct. 5, Saren wrote to Kupiec, stating that she was “stunned to read that you are planning to fill my position. First, my position is not vacant, and I have not submitted either a resignation or a request for retirement.” She wrote that Edwards had “no authority to terminate my employment” and that “Edwards’ effort to dispose of me, despite my superior record, is purely in retaliation for my recently reporting her misconduct to JCOPE.” Saren attached a copy of the JCOPE complaint.

Kupiec responded that she had “no plans to do anything with respect to your position, nor would I have that authority in any event.” She recommended that if Saren felt she was the victim of retaliation, she should report the matter to the Governor’s Office of Employee Relations.

“At no time did Mullen or anyone employed by, affiliated with or representing NYSIF tell Saren why her long-tenured employment was abruptly ended,” Menken contends in the lawsuit.

In an interview, Denver Edwards said there was no connection between his law firm and Tanisha Edwards, besides Varlack and Tanisha Edwards being former colleagues in Cuomo’s office. He added that the law firm has no relationship with Theobalds, the NYSIF chairman.

“I don’t know why they took an interest in our firm,” Denver Edwards said.

When the Bradford firm launched in late 2020, it was widely publicized that “three very talented, experienced African-American professionals had taken a risk in starting a new business at the height of the pandemic.”

“There are leaders of organizations that have made supplier diversity a very, very important thing for their companies,” Denver Edwards said. “There was nothing abnormal, under those circumstances, in having a meeting with an agency that routinely hires third-party law firms.”

In late October, NYSIF enlisted Jackson Lewis, a national employment law firm, to investigate Saren’s allegations about Tanisha Edwards. (In 2020, Jackson Lewis had won contract worth up to $700,000 to provide NYSIF with legal services over five years.)

In mid-February, Jackson Lewis told Saren her complaint was “not corroborated” and “not substantiated.” Jackson Lewis declined to release any further findings to her. NYSIF would not provide a copy of any investigation report to the Times Union, either.

The same month, Edwards resigned from her nine-year appointment as NYSIF’s general attorney to take a job at the New York City Council speaker’s office.

In March, NYSIF offered to reinstate Saren to a position as associate counsel with the same pay, but did not offer a return to her prior position. Saren declined the offer.

Her lawsuit is seeking $700,000 for back pay and other alleged lost benefits, as well as full reinstatement to her prior position. In late April, Attorney General Letitia James’ office, which is representing the state agency, denied Saren’s claims in a court filing.

Mon May 23 , 2022
Published: Published Date – 06:55 PM, Fri – 13 May 22 Kumram Bheem Asifabad: In order to help aspirants of government jobs, authorities of Kumram Bheem Asifabad district have come up with an innovative initiative – to create mobile libraries in rural parts through community participation. The move is yielding […] 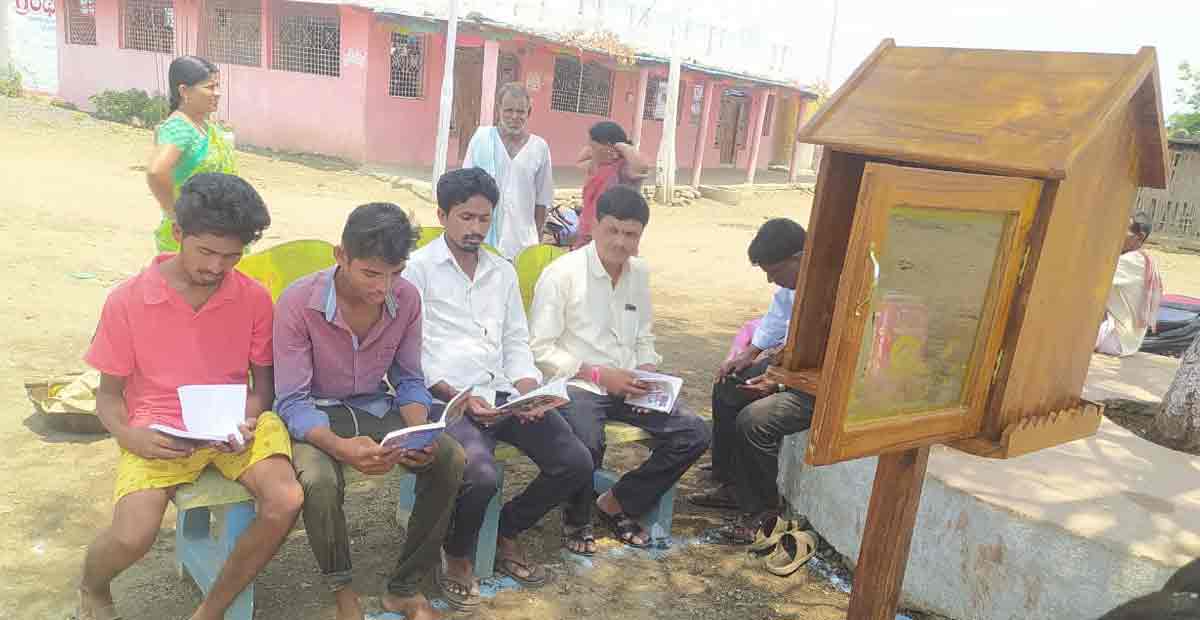