The markets are mostly treading water ahead of the FOMC decision later today. Tech stocks tumbled in Hong Kong and the Hang Seng fell a little more than 1%, while India was the worst performer in the region falling over 2% following an unexpected and intra-meeting hike by the Reserve Bank of India. It raised the repo rate to 4.4% from 4.0%. Europe’s Stoxx 600 is a little lower and has been unable to close the gap from Monday created from the lower opening. US futures are firm. A gain today would be the third in a row for the S&P 500 and NASDAQ and the longest streak since March. The US 10-year yield is little changed near 2.96%, while European benchmark yields are 3-4 bp higher. The US dollar is mostly heavier, with the dollar-bloc currencies taking the lead. Norway’s krone and the Swiss franc are trading lower. Norway’s central bank meets tomorrow and is expected to hold until June. Most emerging market currencies are firm against the US dollar. The notable exceptions today are the Turkish lira, the Philippine peso, and the South African rand. Turning to commodities, gold is steadying after yesterday’s test on $1850. It needs to resurface above $1878 to signal a low is in place. June WTI is firm and set a new three-day high near $106.50. US natgas price is lower for the fourth session, while Europe’s benchmark has jumped 6.5% after yesterday’s 1% gain. Iron ore fell for a third session, while copper is edging higher. July wheat is stabilizing after falling for the past five sessions.

China’s markets re-open tomorrow. It will report Caixin service and composite PMI. The economy is reeling, and the composite will likely fall toward 40 (below 50 means that output is falling). The situation may get worse. The Shanghai lockdown has not been fully lifted and elements are spreading to Beijing. Reports suggest that as many as 60 metro stops (15%) have been shut and nearly 160 bus routes altered. Zhengzhou, a city of around 12.6 mln people has been locked down.

A day after the Reserve Bank of Australia started its tightening cycle, it reported surge in March retail sales. The 1.6% rise compared with economists (median in Bloomberg’s survey) projected a 0.5% gain. Meanwhile, the April service and composite PMI were revised to show more modest acceleration from March than initially reported. The service PMI stands at 56.1, down from the 56.6 flash reading, but still above the 55.6 in March. The April composite PMI is 55.9, not quite as strong as the 56.2 initial estimate but still better than the 55.1 reading in March.

With Japanese markets closed until Friday, the dollar is consolidating in a narrow range against the yen. Today it has been confined to a little less than a quarter of a yen below JPY130.20. For the fourth session it is trading within the previous session. The pattern often acts like a spring coiling. It is often associated as a continuation pattern, which in this case points to a stronger dollar. However, the technical indicators are still over-extended. The Australian dollar is firm but within the cent-range traced yesterday (~$0.7045-$0.7145). Recall that the low set earlier this week was near $0.7030. It is trading around $0.7120 in Europe. Yesterday’s high is the first obstacle, but a move above $0.7200 is needed to signal the upside correction is at hand, rather than a broad sideways consolidation. The US dollar reversed lower yesterday after approaching CNH6.70. Follow-through selling today saw the losses extend to CNH6.6315. Recall that at the end of last week, before the mainland holiday, it settled a little above CNH6.64.

The final April EMU service and composite PMI were unchanged from the flash estimate at 57.7 and 55.8, respectively. However, the composition changed a bit. Germany figures were revised lower. The service PMI still showed improvement over March (57.6 vs. 56.1), but not quite as much as the preliminary reading (57.9). The composite stands at 54.3. The flash report put it at 54.5. In March it was 55.1. Recall that at the end of last year, it slipped below the 50 boom/bust mark. The final French PMI was revised slightly higher. The service PMI is at 58.9 rather than 58.8 preliminary estimate. The composite is at 57.6 up from 57.5 flash estimate and 56.3 in March. However, it was Italy and Spain that offered the larger surprise. Italy’s service PMI rose to 55.7 from 52.1 and the composite improved to 54.5 from 52.1. Spain was even stronger. The service PMI rose to 57.1 from 53.4 and the composite rose to 55.7 from 53.1. The takeaway is that through April, EMU was showing greater economic resilience than expected.

On the other hand, Germany’s March trade figures give a sense that all is not right. It is not so much that the trade surplus fell to 9.7 bln euros from a downwardly revised 11.0 bln surplus in February (initially 11.4 bln euros). Rather it was the larger than expected fall in exports (3.3%, the largest since April 2020 and is the second month in Q1 that shipments fell) and the surge in imports, which reflect higher energy costs. Imports rose by 3.4% after a 4.7% rise in February. German critics often have harangued it for not importing enough and now that imports are rising it is not helping the EMU.

The euro is holding above $1.05 today but is well below yesterday’s $1.0580 high. The $1.06 area is still key to the consolidative/corrective phase. There are options for 1.9 bln euros that expire there today and another set for 1.5 bln euros tomorrow. The downside momentum has broken but there is little enthusiasm on the upside. Yesterday’s upticks were sold. We suspect that Friday’s US jobs report will keep the bottom-picker at bay a bit longer. Sterling slipped to a marginal new low for the week today slightly below $1.2470. A bounce has lifted it to around $1.2525. Yesterday’s high was near $1.2565. Sterling has been recording descending highs for the past couple of sessions. Today could be the third session of lower highs. The Bank of England meets tomorrow, and expectations are solid for a 25 bp hike. UK local elections are likely to stir the political climate. The Tories are facing a two-pronged setback. They are poised to lose a few hundred council seats. And Sinn Fein may garner a majority in Northern Ireland’s assembly. The latter would impinge on the Tory’s Brexit strategy involving Northern Ireland.

There is near-universal consensus that the Federal Reserve will hike the Fed funds target to 0.75%-1.00% with a 50 bp hike. It will also confirm the forward guidance in the March minutes about the balance sheet run-off that will quickly (a few months?) reach a pace nearly double the previous experience (to $95 bln a month). In light of the unexpected contraction in Q1 GDP, the wording of the statement will likely be tweaked to recognize the recovery in consumption and capex. St. Louis Fed President Bullard dissented from the March decision to hike 25 bp favoring a 50 bp move at the time. Subsequently, he suggested a 75 bp hike may be appropriate at some juncture, but he said it was not his base, and it did not appear to win much support from other Fed officials. Governor Waller, the previous head of research at the St. Louis Fed is perceived to be the closest to his former boss. A Governor dissent is rarer and weightier than a dissent by a regional president. To be sure, the statement will point to continued rate hikes. After tomorrow’s move, the Fed funds futures are pricing in another nearly 200 bp increases in the year’s remaining five meetings.

The pricing of the individual contracts shows the perception of a slight risk of a 75 bp move in June or July. This has helped lift the dollar broadly. However, we are wary of “buy the rumor, sell the fact” type of activity. First, most of this news has been discounted. Second, there again is talk of demand for US long-end yields as the long-term yields hover around 3%. Third, looking ahead into next week, there is a reasonably good chance that both consumer and producer prices ease (year-over-year). It would be the first time since April 2020. Fourth, the dollar’s upside momentum stalled in recent days, and after a significant run the technical indicators are stretched. Still, the US April employment picture will be released before the weekend, and around another 400k non-farm payroll additions are expected. The ADP private sector jobs estimate will be reported today. Through Q1, it has estimated an average of 484k private sector jobs were filled. The BLS data puts the average at 552k, and little higher (562k) including government jobs.

Yesterday, we mistakenly expected the Canadian March trade figures were going to be reported. They are due today. But the analysis holds: Canada is benefitting from a positive terms-of-trade shock. The 3-month average trade surplus has risen to C$1.43 bln. A year ago, it was practically zero. It is the highest three-month since 2014. A C$3.75 bln surplus is expected today, which would be the largest since 2008. In Mexico, President AMLO is expected to announce the deal he has negotiated with a dozen or two primary goods producers to voluntarily limit price increases, and in exchange, the government may boost some income and consumption support spending. Some estimates suggest the agreement might be worth 100-200 bp off headline inflation. Still, the market is looking for Banxico to lift the overnight target rate by 125 bp over the next three months to 7.75%.

The US dollar recorded the year’s high near CAD1.2915 on Monday. It has since come off. Yesterday, with the help of rising US equities, saw the greenback eased to around CAD1.2825. There has been a little follow-through selling that took the US dollar to almost CAD1.28. Support is seen slightly lower, and a break of CAD1.2790 could see a test on the CAD1.2750 area. However, the intraday momentum indicators suggest it is over-extended and the US dollar is likely to tick higher in the North American morning, perhaps back to the CAD1.2850 area. The US dollar fell to around MXN20.2630 yesterday and remains at the lower end of yesterday’s range. It has held below MXN20.31 today. Yesterday’s high was close to MXN20.4850. Chart support is seen in the MXN20.1600-MXN20.1850 area.

Editor’s Note: The summary bullets for this article were chosen by Seeking Alpha editors.

Thu May 5 , 2022
Florida State University faculty are leaders in the study of hurricanes and the effects of these destructive storms. Their scholarship has led to research on infrastructure challenges, evacuation routes, sustainable tools and mental health challenges for those affected by hurricanes. Other researchers are considering the effects on coastal wildlife and […] 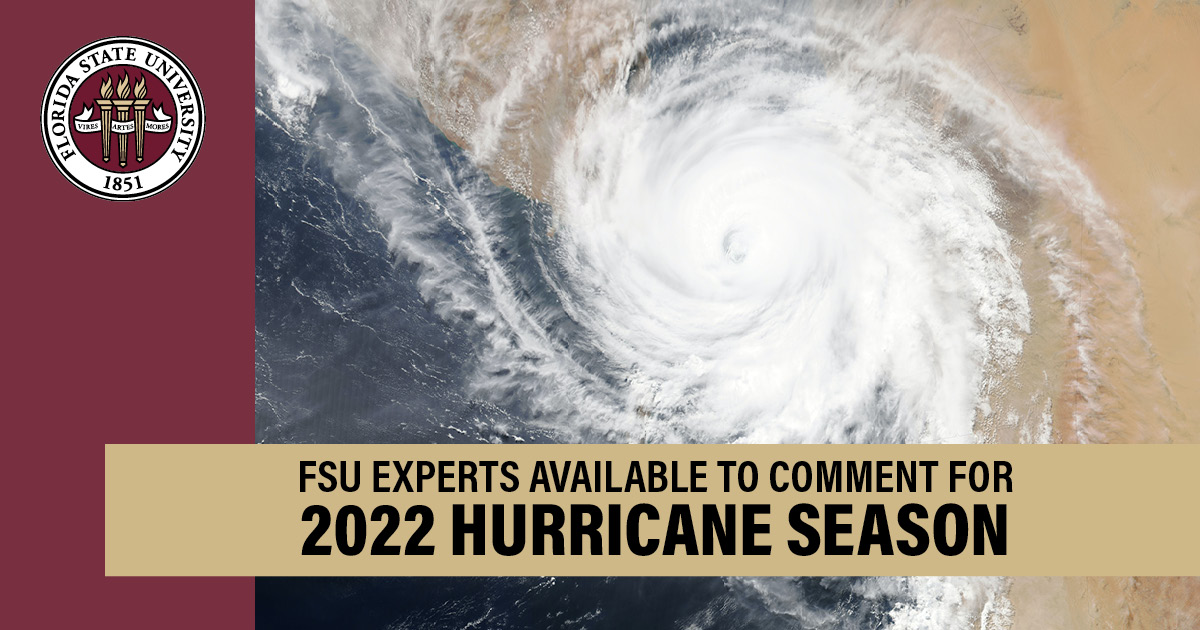